William Cork is Assistant Director of Adventist Chaplaincy Ministries for the North American Division, with responsibility for the Great Plains Region, consisting of the Mid-America and Southwestern Union Conferences.

He spent twenty years as a chaplain in the National Guard and the US Army Reserve. In his final assignment he was part of the Strategic Initiatives Group at the Office of the Chief of Chaplains.  In 2013 he deployed to Kuwait in support of Operation Enduring Freedom. He also has eleven years experience in full-time public campus ministry and taught world religions at a Houston area community college. He pastored for five years in the Texas Conference.

Cork graduated from Atlantic Union College, began graduate study in church history at Loma Linda, and received his M.A. in church history and his M.Div. from the Lutheran Theological Seminary at Gettysburg. He is currently a Master of Public Health student at University of Texas Health Science Center in Houston, and is an active member of state and national suicide prevention organizations. Bill and his wife, Joy, live in Houston, TX, and have two young adult children, Andrew Cork and Aimee-Joy Hearn.

Chaplain Washington Johnson joined Adventist Chaplaincy Ministries in December 2013. As a United States Navy Reserve chaplain, Captain Johnson was deployed to Djibouti, Africa. During his deployment Johnson served as Deputy Command Chaplain and Senior Protestant Chaplain for approximately 3,500 service personnel at Camp Lemonnier, the only permanent U.S. military base on the African continent. 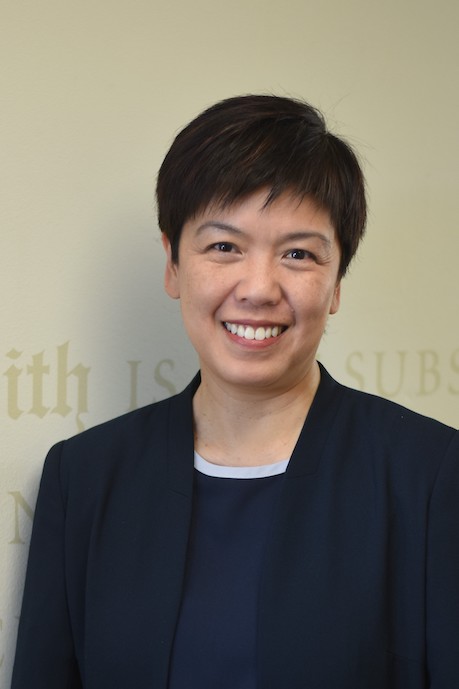 Angela Li currently serves as assistant director of Adventist Chaplaincy Ministries for the North American Division of Seventh-day Adventists. Her area of responsibility covers the west region of the United States – California, Oregon, Washington, Alaska, Idaho, Utah, Nevada, Arizona, and Hawaii.  She is a commissioned Seventh-day Adventist minister and an endorsed Adventist health care Chaplain. She also serves as a part-time pastoral staff at the Mission Road SDA Church.

Dr. Li is board certified with Association of Professional Chaplains and has received her MBA degree from University of Redlands, Master’s in Clinical Ministry degree from Loma Linda University, and PhD degree in Practical Theology from Claremont School of Theology.

She worked as a hospice chaplain before joining the Chaplains Department at the Loma Linda University Medical Center. After working as a full-time health care Chaplain for six years, Dr. Li joined the faculty at the Loma Linda University School of Religion. Besides teaching, she was serving as the program director for the MS Chaplaincy program. During her service there, she led the upgrade of the program from 72 to 108 quarter units, which then meets the requirement for board certification and endorsement.

Together with her husband, Ken Li, DDS, they have two children, away at college. Dr. Li sees God’s love, grace, and compassion as a healing agent and basis of spiritual growth for all. Her passion and research interests include pastoral development/formation, spiritual care/chaplaincy subjects, spirituality, Asian American theology, and spiritual development of youth. Her favorite scriptural passage is, “He has shown you, O mortal, what is good. And what does the Lord require of you? To act justly and to love mercy and to walk humbly with your God.” (Micah 6:8)

Chaplain M. Gilda Roddy has served as an Assistant Director at Adventist Chaplaincy Ministries—North American Division since September 2019.  Her territory includes the Columbia, Atlantic, and Lake Unions, as well as the Adventist Church in Canada.

Chaplain Roddy was born in Mauritius. Her adolescent years were spent in Australia. After graduation from high school, she took a leap of faith and matriculated to Oakwood College. There she built lifelong relationships as she prepared for a career in Gospel ministry.

Her leadership and pastoral career blossomed at Oakwood University where she served as the Associate Pastor for Young Adults. Subsequently, she served in the Florida Conference, for 10 years, as Pastor of the Celebration Church and Chaplain at the Celebration Hospital in Orlando. In another leap of faith and adventure, she accepted a call to the Greater Sydney Conference in Australia, she served as the Director of Ministries for Women, Children and Sabbath School.

Her next phase of ministry was in the Loma Linda Community. While there she completed a Master of Science degree. Roddy also served as a staff chaplain while pursuing doctoral studies in Mission Leadership. During that season of her life, Chaplain Roddy was ordained by the Southeast California Conference.

Chaplain Roddy came to the ACM from the staff of the Loma Linda University Church where she developed the ministry of pastoral care.

Deena Bartel-Wagner began editing the Adventist Chaplaincy Ministry journals in 2006 and was instrumental in changing them from a newsletter into professional magazines. Currently, she oversees the editorial process of of The Adventist Chaplain and For God and Country. Her other duties include webmaster of the General Conference ACM and North American Division websites, and the World Service Organization website. Additionally, Bartel-Wagner is the social media manager for ACM.

Bartel-Wagner believes everyone has a story to tell. Helping others to find the voice for their story is one of the best parts of her job.

Her international experience comes from working and living in Thailand, Cambodia, the Marshall Islands, the Chuuk Islands, and the Republic of Congo. She is married to Dr. Gary Wagner. They are the parents of three young adults, one daughter-in-law, and grandparents of three granddaughters.